Today we’re announcing that we’ve supercharged the engine that powers our relationship mapping features. A lot of those changes have happened under the hood here at CharityCAN, and aren’t immediately apparent. While you can’t see some of the differences to the platform yet, we’re also announcing the first of the new features that this new engine enables: the ability to modify a saved profile’s relationship map by adding or removing charity and corporate board positions.

On saved profiles that currently have charity boards listed, you can add and remove board positions by hovering over the position you’re interested in:

Since our relationship maps are built on these charity and corporate board connections, as you add and remove board positions, you’ll see the saved profile’s relationship map update in real time.

The best part about this new relationship graph engine is all the new possibilities that it opens up. We’ve got a few more features that use the new engine in the pipeline that we’re excited to share with you soon! If you have an idea about how you’d like to use our relationship map data, please let us know! 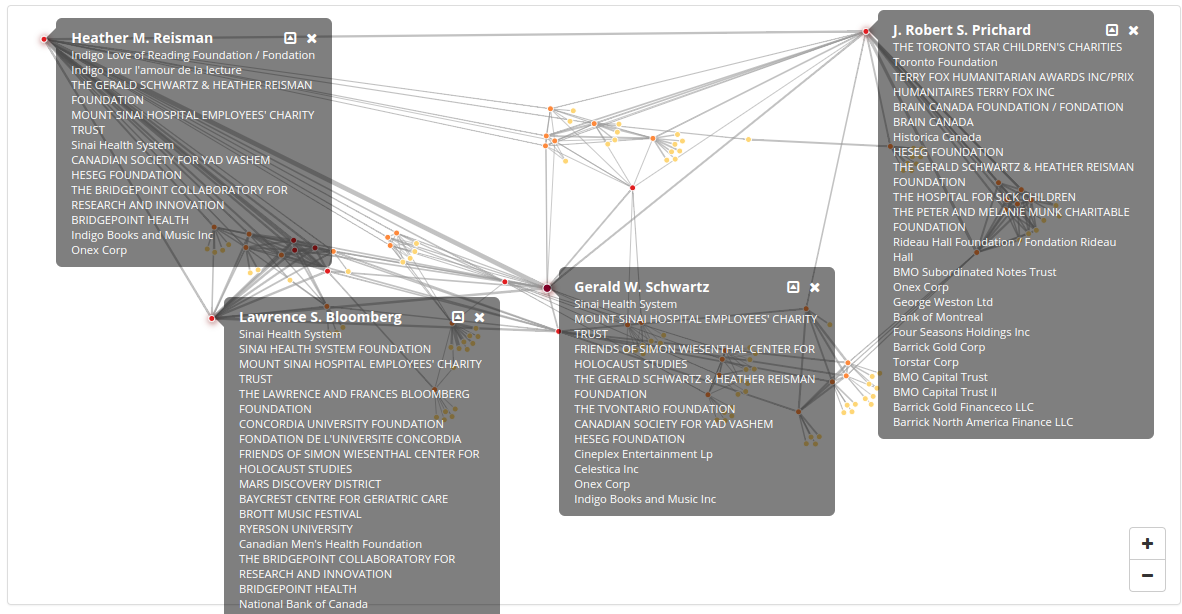 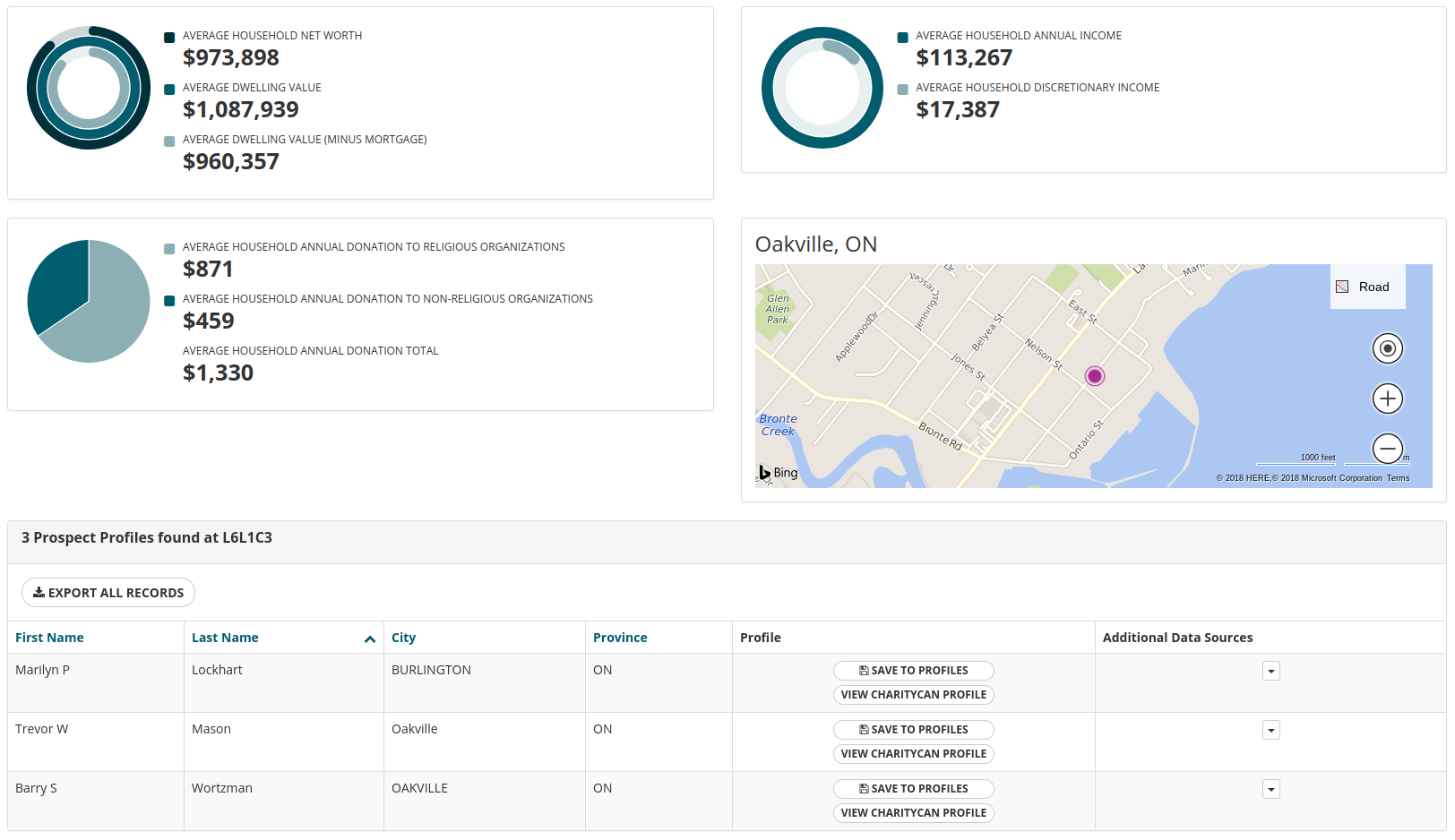 Successful prospect research means being able to answer the following questions about your prospective donors as efficiently and accurately as possible:

In this guide, we will introduce you to the fundamental elements of prospect research by looking at propensity, capacity, affinity, and connection. 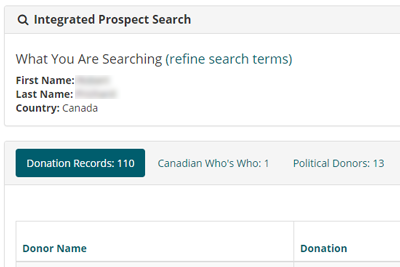 Another useful way to gauge propensity is by looking at how your prospect spends his or her time. This method is less useful with corporate or granting foundation prospects, but can be invaluable when assessing an individual’s propensity. The following questions are instructive:

These questions will help determine if your prospect has the inclination to donate a valuable a resource – time – to pursuits beyond self-interest. Public service can be a powerful indicator of how an individual views his or her role in society and his or her propensity for charitable engagement.

A major challenge prospect researchers face when determining capacity is total wealth. Unless you have access to a prospect’s entire financial history or he tells you (and you have reason to believe him), it is almost impossible to determine exact wealth.

Consider the following scenario. You are researching two prospective donors and have access to the reasonably accurate information about the market value of their homes. Prospect A owns a home with a market value of $2 million. Prospect B owns a home with a market value of $500,000. Simple enough, right? Prospect A has a greater capacity to give than prospect B. But what if prospect A has a mortgage of $1.7 million remaining on the home and prospect B paid for the home in cash and doesn’t carry a mortgage? Some of back of the napkin math shows that dwelling value minus mortgage for prospect A is $300,000 and dwelling value minus mortgage for prospect B is $500,000. Perhaps prospect B has the greater capacity after all.  What if you also have compensation data for both prospects and last year prospect A received a total compensation package (salary, bonus, stock) from her employer of $600,000 and prospect B received a salary of $120,000? It looks like prospect A is back in the lead. 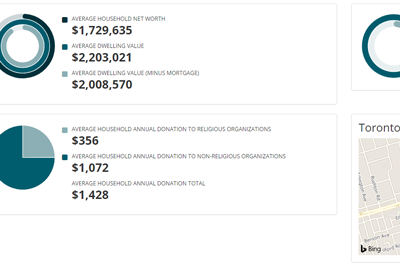 Traditionally, prospect research has focused strictly on determining propensity, affinity and capacity and supplying research and data that supports those determinations. Connecting with potential donors has been left to fundraisers. This is changing. Data that reveals organizational connections and relationships is becoming more readily available. This is helping to make relationships and connections more quantifiable than they have ever been. Compare “a member of our board served on the board of a company we would like to approach for a sponsorship from 2009-2015” versus “I’m pretty sure they used to golf together.” The availability of objective data about connections is pushing relationship research under the purview of prospect researchers. 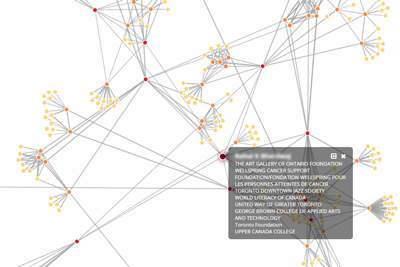 When researching relationships, your most important concern should be verifiable data. Treat relationship data like you would donation or compensation data and look for the best data available. T3010 data (the T3010 is the tax form required by the Canada Revenue Agency to be filed yearly by every registered charity and lists the individuals on the charity’s board of directors) and management proxy circulars (securities regulators require publicly traded companies to file circulars that list key officers, executives and board of directors members) are a great place to start researching connections and relationships. Both are legal documents listing the key people at the organizations; analyzing them can help you determine – from a wholly verifiable source – who knows who and how they are connected.

A very fruitful place to start looking for connections is your own board of directors. Almost all board members have – at the very least – an implicit fundraising mandate. Also, many board members serve on multiple boards, both charity and corporate. Mining the connections of your board of directors for relationships with people who sit on the boards of large companies or granting foundations can be the difference between an accepted sponsorship, gift or grant request and a rejected one.

Imagine you are tasked to create a list of donors with the potential of making a $10,000 gift to your organization. First, you need to determine propensity. You can do this by examining your list of prospects eliminating those that have never made a charitable gift. Second, you need to determine affinity. To do this, eliminate the names on the list who only give to organizations with dissimilar missions or have a well documented history of only giving to a single organization. Third, you need to determine capacity. To do this, use real estate, financial holdings, and compensation data to eliminate the names on the list who do not have the capacity to make a $10,000 gift. The names left on your list are reasonably well-qualified prospects to make a $10,000 gift to your organization. Finally, research connections and relationships to determine if your organization is linked in any way to the remaining names. The names you do have connections with should be prioritized for approach. They have the propensity to give, an affinity for your cause, the capacity to make a gift you are pursuing, and connections to your organization you can utilize in your approach. They are well-qualified prospects.

Understanding the fundamental aspects of prospect research will help you direct your research more efficiently. You will spend less time chasing down information of questionable value and more time finding verifiable data that helps answer the necessary questions about propensity, affinity, capacity, and connection.

How does it work?

CharityCAN maps relationships between two people based on time spent together on charity and corporate boards. So, if two people were on the same charity or corporate board together at the same time, CharityCAN identifies and maps that relationship. If two people have been on multiple boards for multiple years, CharityCAN would identify that relationship as being stronger than if those same two people had only spent one year together on one board. Relationship Paths search takes that entire map and searches through all of those connections to find if and how people, charities, and companies are related and ranks them by connection strength.

Here is an example:

In the example shown below, a prospect researcher at the Ontario Society for the Prevention of Cruelty to Animals (ONSPCA) wants to determine if anyone on his board of directors has a connection to BlackBerry (formerly Research in Motion). He has identified BlackBerry as a potential corporate donor and is in the process of determining the best way to approach it for a gift.

This Relationship Path search revealed 2 connections between the ONSPCA and BlackBerry. Clicking on the connection arrow reveals the nature of the connection. In the example above, we can see that Stewart Hill (ONSPCA) and Carl Wiese (BlackBerry) are connected through their time as board members of Humber Community Seniors’ Services.

Relationship Paths builds on CharityCAN’s powerful Relationship Mapping functionality to provide users a quick and direct way to search for connections among people, charities and companies. For more information, please contact us or sign up for a free trial!