After months of work behind the scenes, today we’re announcing a new way to do prospect identification in CharityCAN: a new feature we’re calling Donor Discovery.

Donor Discovery uses our donation record dataset with our relationship graph to give you a customizeable way to find new potential donors.

Set up filters like geographic region, donation amount, connections, donor type (individual, foundation or corporate) and cause to cast as wide or narrow a net as you’d like. We’ll show you donors who have given gifts according to your filters but who haven’t (yet!) made a recorded donation to your chosen organization. 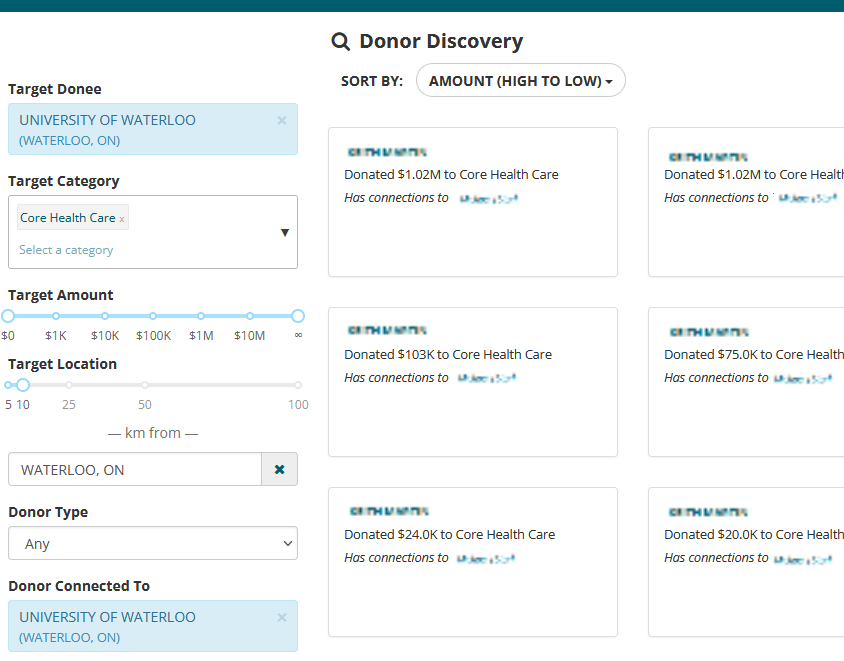 For example, a university looking for funding for a new medical school building might look for health care donors in their geographic region with a connection to the university’s board of directors. A smaller local charity might look for individual donors to their cause giving amounts of under $1,000.

Once the results are generated we’ll show you how much the donor has given in the past and how they’re connected to your organization, with a link to the donor’s profile so you can quickly qualify your prospect.

We hope that by using relationship data as well as past donation data, we can surface prospects with a higher affinity to your organization and give you a path to connecting with them.

If you have a CharityCAN account already, please try out Donor Discovery and let us know what you think. If not, you can give it a go by requesting a trial.

Here at CharityCAN, we help Canadian charities make positive change in the world by giving them the tools to fundraise more effectively.

But we don’t just want to do our part to improve where we live – we also want to make sure we’re not doing anything to make it worse.

That’s why this summer, we started to offset the company’s carbon emissions in an effort to become carbon neutral.

To achieve this goal, we’re working with a company called Patch to calculate the carbon that running our company and software produces and then purchase carbon offsets to reduce that carbon footprint.

As a small software company, we don’t produce physical goods, so there’s nothing to offset there. But we do run our software on cloud servers, which of course run on electricity. Most of our cloud infrastructure is hosted on Microsoft Azure, which has been carbon neutral since 2012. But we do have some servers running on other services that are not carbon neutral, so we’re offsetting those.

We’re also a remote-first company, so we don’t have a big office building to power. But we do have employees using electricity at their own homes, and we purchase and throw out computer equipment and other office supplies. To calculate how much carbon each employee uses, we borrowed from Basecamp’s estimates as they’re also a remote-first SaaS company.

For the time being we’re using Patch to offset our carbon by funding forestry projects. When our company gets a little bigger we hope to be more ambitious and start funding some carbon sequestration projects as well.

This is just a start – hopefully one day we can join some of the companies who have committed to becoming carbon negative. Until then, we can at least do our part to make sure we’re not putting more carbon into the atmosphere, and encourage other small businesses like ours to do the same.